This design for the Rak Tamachat nursery is focused mainly on the general layout of the nursery, the placement of elements.
I'm not zooming into details very much. The idea is to give an overview of how the nursery will look and the approximate dimensions. 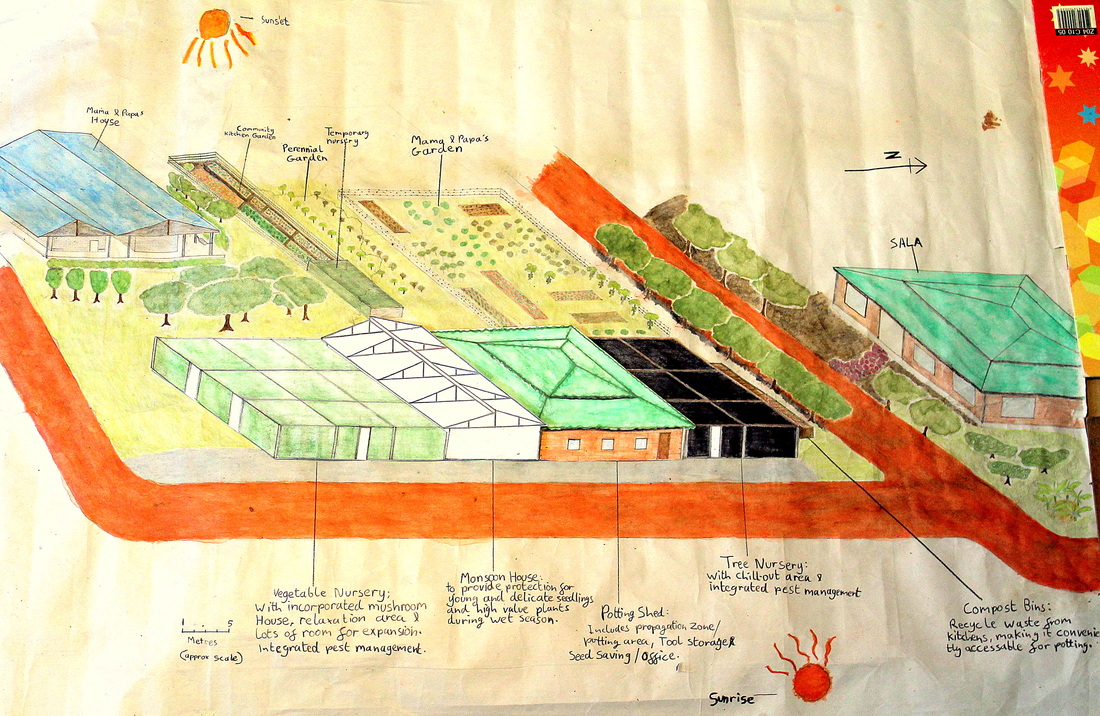 The design is based around the central structure ( the potting shed). It was the clients desire that this structure should be the central element of the nursery, therefore all other elements have been designed around this.
I decided on the placement of the Tree nursery on the north side of the potting shed as this side will be the most shaded and therefore unsuitable for the veg nursery. The trees will benefit from extra shade. The main access will be from the road, on the north side of the structure so that people can enter easily and directly from the sala. Secondary access will be from the eastern side as depicted.
The tree nursery will also house a chill-out area consisting of seating around a small pond (with fountain or bubbler for water movement) containing fish. The pond will double as an integrated pest management system by creating a habitat for frogs, toads, lizards, dragonflies and other amphibians and reptiles which will help to control the populations of  insects in the nursery.

The potting shed is located at the heart of the nursery and will be divided into three rooms, the largest of which (half of the interior space) will be the potting / propagation area and also storage of potting supplies. Two smaller rooms will be allocated for; 1. Seed saving / office for dealing with direct sales in the future and for categorizing and storing seed. 2. Lockable tool storage; for the organised and secure storage of tools. 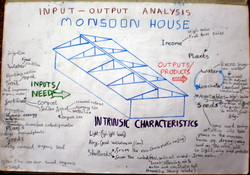 The monsoon house has been designed to protect delicate plants and seedlings from the intense tropical monsoonal rains that we get here in Thailand whilst at the same time trying to minimise extremes in temperature that would occur if we were to build a standard (western style) greeenhouse or pollytunnel. The design incorporates an overlapping roof and mesh sides which help to create passive aeration reducing the heat and providing air movement. This structure is placed on the south side of the potting shed where it will receive more light. It connects the potting shed to the veg nursery with the veg nursery located to the south, cooling the air before it enters the monsoon house.

The vegetable nursery is located at the southern end of the nursery complex. It is much larger than the tree nursery but the idea is that alot of the space will be reserved for future expansion and increased production in later years and could well be used to house more trees and developed into an extra tree nursery. The veg nursery will also contain a chill-out area much the same as in the tree nursery, including pond / integrated pest management.